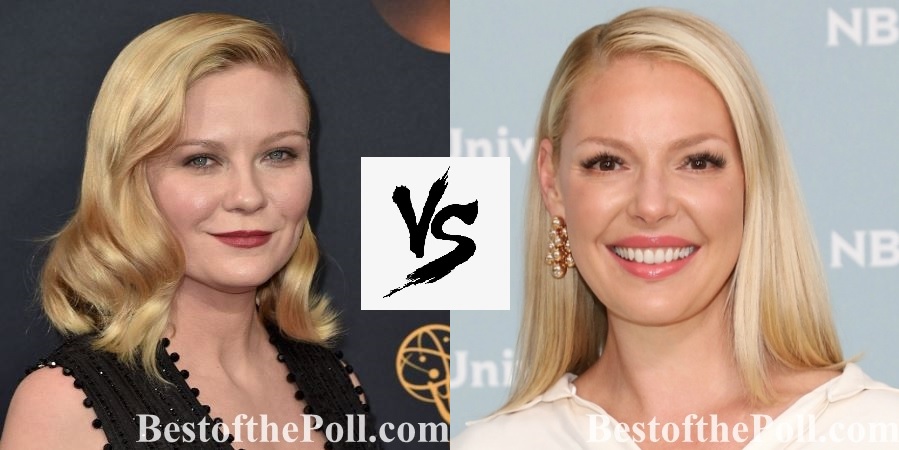 Kirsten Dunst: Kirsten Caroline Dunst (born April 30, 1982) is an American actress. She made her debut in the 1989 anthology film New York Stories, appearing in the segment Oedipus Wrecks directed by Woody Allen. At the age of twelve, Dunst gained widespread recognition as Claudia in Interview with the Vampire (1994), for which she was nominated for a Golden Globe for Best Supporting Actress. She appeared in Little Women the same year and in Jumanji the following year. After a recurring role on the third season of ER (1996–97), and appearances in films such as Wag the Dog (1997), Small Soldiers (1998), and The Virgin Suicides (1999), Dunst starred in a string of comedies, including Drop Dead Gorgeous, Dick (both 1999), Bring It On (2000), Get Over It and Crazy/Beautiful (both 2001). Wikipedia

Katherine Heigl: Katherine Marie Heigl (born November 24, 1978) is an American actress, film producer, and former fashion model. She started her career as a child model with Wilhelmina Models before turning her attention to acting, making her film debut in That Night (1992) and later appearing in My Father the Hero (1994) as well as Under Siege 2: Dark Territory (1995). Heigl then landed the role of Isabel Evans on The WB television series Roswell (1999–2002), for which she received nominations for Saturn and Teen Choice Awards. Wikipedia