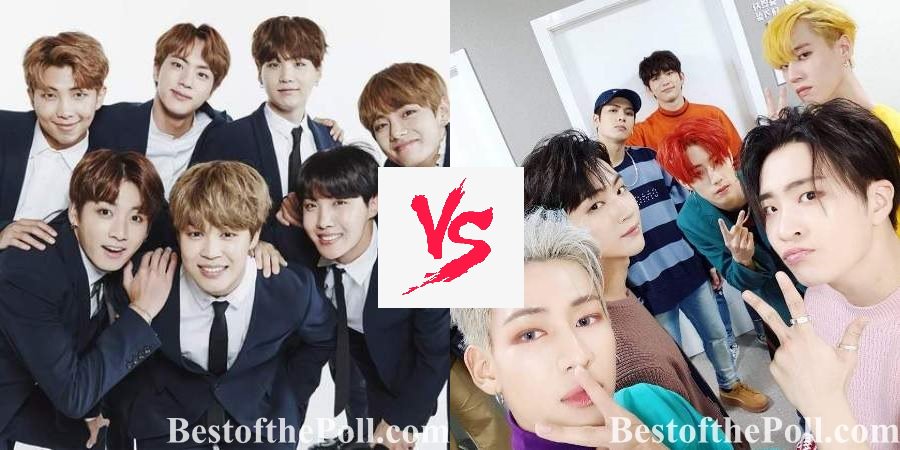 BTS: BTS (Hangul: 방탄소년단; RR: Bangtan Sonyeondan), also known as the Bangtan Boys, is a seven-member South Korean boy band formed by Big Hit Entertainment. On June 12, 2013, they first performed the song “No More Dream” from their initial album 2 Cool 4 Skool and commemorate their debut on June 13, 2013. They won several New Artist of the Year awards for the track “No More Dream”, including at the 2013 Melon Music Awards and Golden Disc Awards and the 2014 Seoul Music Awards. The band continued to gain prominence with their subsequent albums Dark & Wild (2014), The Most Beautiful Moment in Life, Part 2 (2015) and The Most Beautiful Moment in Life: Young Forever (2016), with the latter two entering the U.S. Billboard 200. Wikipedia

GOT7: Got7 (Hangul: 갓세븐) is a South Korean boy band formed by JYP Entertainment. The group is composed of seven members: JB, Mark, Jackson, Jinyoung, Youngjae, BamBam, and Yugyeom. Got7 debuted in January 2014 with the release of their first EP Got It?, which peaked at number two on the Gaon Album Chart and number one on Billboard’s World Albums Chart. The group gained attention for their stage performances, which include elements of martial arts tricking. Wikipedia

BTS, BTS vs GOT7, favorite K-Pop Boy Bands, GOT7

75 Responses to BTS vs GOT7