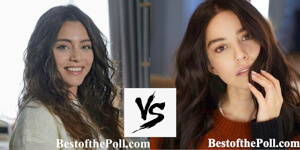 Who is your favorite actress? Sıla Türkoğlu vs Özge Gürel? Vote for your favorite one! You can vote only once in 24 hours. Sıla Türkoğlu: Sıla Türkoğlu (born 18 April 1999, İzmir, Bornova) is a Turkish actress. She started acting in 2018 with the Ağlama Anne series, which she starred in. Continuing on his […]